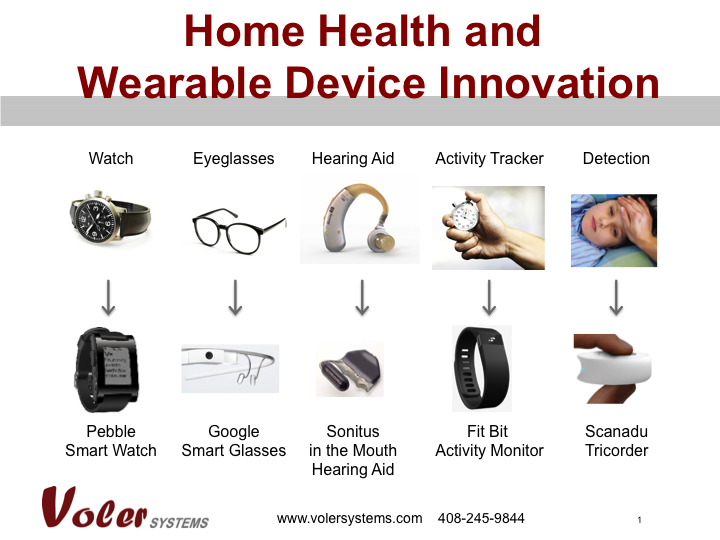 This article by Walt Maclay originally appeared in Wearable World News as “Innovation Trends For Sensors And Wearable Devices” at http://wearableworldnews.com/2014/05/21/innovation-trends-sensors-wearable-devices/ on May 21, 2014. Download the pdf here.

In the  last 18 months there has been an acceleration in the evolution of wearable devices that incorporate sensors. We think they are poised to break out of technology-enthusiast and early-adopter usage into mainstream acceptance.

The real trend here is the augmentation of existing wearables, such as eyeglasses, watches, hearing aids, and jewelry with sensors. Looking at wearable devices, many people say “this is just a fad,” and ask, “does anybody really use this for long?” We maintain that the electronic augmentation of what were traditionally mechanical or optical devices is not only here to stay, but will continue to grow.

Not only will everyone in Silicon Valley be carrying one or more gadgets, but established wearables will incorporate more complex electronics and sensors. These traditional devices are a huge market.  The smarter and “more sensitive” versions will supplant them, adding new capabilities to their traditional affordability.

Let’s take a more detailed look at some wearable devices that have incorporated sensor applications.

Activity monitors are devices that measure activity level, and most of them have an accelerometer or GPS or both. Some are medical devices and some, like the Fitbit and a golf tracker, are not.  Every time a step is taken, it senses the vibration.  The data is sent to a phone or computer app, which converts the steps taken into calories burned.  Popular devices can track the quality of sleep or monitor for falls.  Companies are cleverly using very simple sensors to get a lot of information.

Other diagnostic devices, like the Tricorder (a la Startrek), measure temperature, heart rate, ECG, blood oxygen level, and heart rate variability. Some devices measure approximate blood pressure from the pulse wave transit time, how fast sound passes through the blood.  Putting all of these measurements together enables a more complex analysis that can determine indicators for stress or disease. In most cases, the intelligence is not in the Tricorder. The intelligence is in a phone, PC, or remote server. So even low cost devices with simple sensors can send the data to a phone or other more powerful processors to make a useful analysis.

A popular golf game tracker uses GPS to know location of the person and accelerometers to know what they are doing. The device scans the head of the golf club and determines the club being used.  The tracker knows when the person has swung, which club, and where they have been on the golf course.  Using cloud computing, it puts all this information together and  provides a complete record of the golf game.  It knows the club used, distance of each ball hit, where it landed and shows it on a map of the golf course.  The golf game information is available online for your review.

Sensors are everywhere.  Your car is full of them.  Your phone is full of them.  There are three key reasons for this growth in the use of sensors: sensors continue to shrink in size, are cheaper and use less and less power. A good example is accelerometers, first used in air bags in cars.  They dropped very quickly from hundreds of dollars to tens of dollars.  Then they were used in all types of other things and now they are in smartphones being used by the billions, and the price is down to a dollar.  So it has been a huge advance in a few decades.  As they get smaller and cheaper, more markets open up.  Sensors are changing the world by adding smarts to traditional devices.

Some common sensors measure temperature, pressure, vibration, fluid flow, and acceleration. Additionally, cameras and microphones are very common.  Now newer phones have gyroscopes and magnetometers.  There are now single-chip solutions available that contain three accelerometers, three gyroscopes, and three magnetometers.  We will see continued improvement in accuracy and sensitivity of current sensors, as well as the ability to detect other forms of energy and substances.

Chemical sensors are coming on in a big way.  Two examples are the “gene detecting chip” and “lab on a chip” where fluids are run through the chip to analyze the fluids.  In the future I think we will see significant advances with paper-based sensors too, resulting in better glucose detection and other chemical sensing.  Paper-based sensors are very low cost and disposable, current work will lead to major improvements relatively soon.

Fiber optic sensors are really great because they are non-metallic and non-conducting and offer a safe alternative to invasive electronic devices.  You can insert one temporarily into the body and not worry about electrocuting somebody.  They are already quite small, a quarter of a millimeter in diameter.  They work great in harsh environments and can transmit light directly to what you want to observe. This is especially useful where there are multiple sensors in one fiber. Common fiber optic sensors measure pressure, temperature, strain, and force.  The biggest problem with them is that the electronics to create the signal is still too expensive for widespread use.  Current work may soon reduce the costs resulting in increased usage.

Let’s review some of the current challenges and constraints.  What is limiting adoption? With many IoT devices, batteries are probably the major limitation.  Batteries will continue to improve slowly but will continue to be a significant constraint as we try to make them last longer or make them smaller. Battery power and capacity is the key limit on wireless transmission range.  For example Bluetooth and Wifi don’t go very far.  Bluetooth is relatively low power.  Cellular transmits a few miles and uses a lot of power.  One workaround is to transmit in bursts, turning on that really powerful cellular transmitter for a fraction of a second, to send data and then turning it off as fast.  However, this can create a problem for the receiver, which only listens for information when turned on: if one device only sends now and then and the other only listens now and then, they may never hear each other.  Protocols like WiFi and cellular require regular or almost continuous connection, making it difficult to save battery power.  GPS is moderately power hungry. Accelerometers are very low power.  Often you can use an accelerometer instead of a GPS module to reduce power.  The data is different, but with clever software an accelerometer is often able to give good position information.

With cameras, often the biggest problem is lighting and not an easy problem to solve.  Lighting takes power.

Sensors themselves have limitations in accuracy and linearity. Extremely low cost sensors are really cool but are less accurate than the expensive ones, mainly in linearity, offset, and drift.  These errors can be greatly reduced by calibration.  Factory calibration can be expensive, and it doesn’t easily overcome problems with drift.  Calibration during use requires knowing when calibration makes sense.  For example, offset errors can be removed by storing the readings when an accelerometer is stationary.  The accelerometer can’t distinguish stationary from a slow constant acceleration.  This could lead to an incorrect calibration.  Software can get around many of the limitations, but you need good electronics to collect the data.

Since the ‘80s, automobiles have been using more and more sensors and are now full of them.  This has driven innovation, which lead to sensors in smartphones.  And in the last few years smartphones are full of them.  What is going to drive sensors in the future?  I think home health and wearable devices and the Internet of things are made possible because of improvements in sensors.  Widespread use of sensors in these applications will result in further improvements in size, cost, and power consumption of sensors.

If you missed Voler Systems at RTECC, here are the slides.