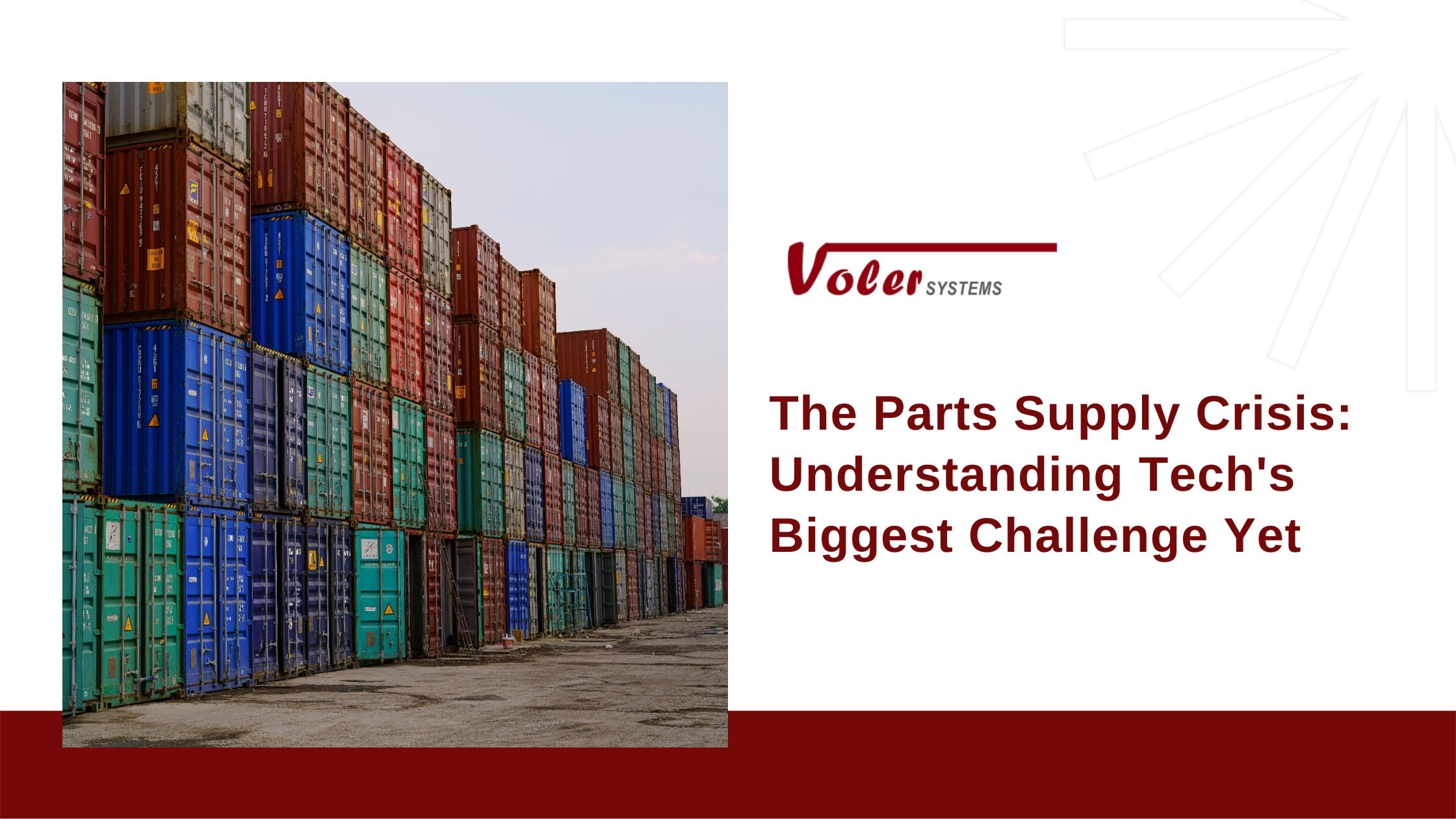 Anyone in the tech industry knows that we're in a global supply crunch. It's an issue that continues to dominate news headlines. While many believe that the shortage is simply another byproduct of the worldwide pandemic, its impact has far-reaching effects that could shape the market moving forward.

The demand for IoT technology is at an all-time high, and the pandemic only accelerated the need for high-tech solutions in healthcare, manufacturing, logistics, and other crucial industries. Unfortunately, the shortages are putting a damper on progress, leaving many tech companies to reevaluate their plans and find alternative solutions to overcome these unique challenges.

The biggest issue with the parts shortage is a lack of semiconductors or "chips." Chips are often the brains of a device. They're tiny technological marvels with complex circuits that control most of a gadget's processes. Without chips, most modern devices wouldn't even exist.

Semiconductors are the lifeblood of modern society. These components power everything from the complex safety systems in your car to the controls in your washing machine. Most people don't give microchips a second thought, yet they power so much of our lives.

For this reason, the shortage is not a minor issue. It has far-reaching effects that only exacerbate other supply issues. Pair that with a short supply of sensors and other necessary parts, and developing new products can be an uphill battle.

What Caused the Shortage?

Contrary to popular belief, the timeline of our current shortage doesn't fall in line with the COVID-19 pandemic. The public health crisis certainly exacerbated the challenges we face today, but many experts say that its problems with chip manufacturing started much earlier.

A dramatic increase in demand from the automotive industry is a significant contributing factor. Over the last decade, manufacturers have included more and more intelligent electronics systems into vehicles. Infotainment systems, navigation, steering support, rearview cameras, and other automotive components utilize high-tech chips. The production of Advanced Driver Assistance Systems, in particular, has seen a steady increase since 2014.

Automakers sold more than 17 million vehicles in the United States alone in 2019, creating the need for billions of semiconductors.

The pandemic caused a sharp decline in 2020 auto sales. However, another problem contributed to the parts shortage.

Lockdowns forced many to stay home from work and school, increasing the reliance on emerging technologies. This caused a significant increase in the need for IoT devices.

Even those who didn't have to work or learn virtually invested in new products and gadgets to pass the time. Research by Strategy Analytics found that consumer electronics revenue increased by at least 7% in 2020. Home computers, gaming consoles, and connected home technology saw the biggest boon.

The sudden increase in demand was impossible to forecast. As a result, the semiconductor market suffered from the bullwhip effect that rippled through the supply chain. Manufacturers couldn't keep up with demand.

Chip manufacturing came to a screeching halt, with many factories closing in 2020 due to government mandates. The shutdowns were an attempt to control the spread of COVID-19, but they ended up causing widespread delays and millions of jobs lost.

Approximately 75% of the world's semiconductors come from East Asia. The shutdown put roughly 23 million people out of work and caused a $2.1 trillion loss.

While many of those factories have reopened for chip production, it will take time to overcome the shortfall in production. Manufacturing these components is a complex process, and creating new facilities is a multi-billion-dollar investment.

The supply shortage was only made worse by complicated politics. Massive tech company sanctions from the United States impacted the supply issues. It indeed highlighted the issue of relying on only a few countries for manufacturing.

The government's current role in the parts crisis is evolving. The United States and semiconductor manufacturers like Intel are investing in more onshore manufacturing facilities, but it will take years to see a return to normal.

Unfortunately, the shortage is leading to widespread panic. Dealers are reportedly snatching up available stock and hoarding it to overcome the effects of the crisis. Not only has that put more stress on manufacturers, but it's opening up discussions about the potential for prioritization to specific industries such as MedTech that produce lifesaving devices.

There is one bright side to this huge problem. Unlike past chip shortages, the semiconductor industry has reduced double ordering by requiring payment in advance. This reduces the number of fake orders that are just insurance for the buyers. In past chip shortages, this has led to a sudden drop in demand as these fake orders suddenly disappeared. The downside is that buyers now need to pay cash for the parts, sometimes months before they get them, which hurts the companies building the products that use the chips.

The Impact of the Parts Supply Crisis

The fallout from the global chip shortage is massive. It doesn't just affect one industry or cog in the supply chain. The crisis impacts everything from the design process to consumer pricing.

Companies developing products are experiencing significant delays. Chip delivery times surpassed 20 weeks in 2021. Even Fortune Top 10 companies like Apple had to delay product launches because no semiconductors were available to meet the demand.

Automakers, medical technology companies, and more are suffering from lengthy lead times. A reported 160 industries are feeling the heat from the shortage.

But that's not all. Prices have gone up across the board, too. Auto prices are at an all-time high for new, used, and rental vehicles. Forecasters expect the price hikes to cause upwards of $210 billion in lost revenue for 2021.

Meanwhile, the price tag for consumer electronics is snowballing as manufacturers try to pass those expenses onto buyers.

As a whole, economists fear that the crisis is putting the world's economy at risk. The globe is already facing economic challenges in the post-pandemic world, and the shortage isn't going to help. Analysts from Wells Fargo believe that the supply issues will curtail US GDP growth by 0.7%. On a global scale, things could be even worse.

Despite the many steps manufacturers and governments are taking to curb the parts supply crisis, it's not a quick fix. We're starting to see improvements in many areas, but the ripple effect will continue to impact the tech industry over the next several years.

Analysts believe that the shortage will last until 2023. Some think that the disruption the crisis caused will take even longer to recover.

The parts shortage makes it challenging to design and produce new products. It's causing market delays and putting a wrench in plans for companies around the world. However, that doesn't mean that you must put your ideas on the back burner.

Voler Systems is here to help bring your product to market despite the challenges facing the tech industry. We take component availability into account when designing new devices. Furthermore, our extensive partner network works to locate available parts from around the globe.

A key part of designing any device is making sure the parts are available and not nearing obsolescence. It is now more important than ever to check on part availability. Fortunately, in the design phase, choices can be made. If a part is not available, there are often similar alternatives.

We understand that long lead times can have devastating effects on your bottom line. If you have existing products with part shortages, our team can identify replacement parts or redesign elements to use what's readily available. Our goal is to keep your deployment plans on track.

With our connections and expertise in electronic design, we can provide the solutions you need to keep your product development moving forward. We are designing more new products this year than ever before, and our customers are successfully moving them into production.

If you missed Voler Systems at RTECC, here are the slides.

The COVID-19 pandemic is almost as real and devastating to the world today, June 2021, as...

The Impact of Wearable Technology in Healthcare

The rise of health and fitness apps, growing health-consciousness, and the need for...