Making the Most Out of Low-Power Wireless Charging Technology 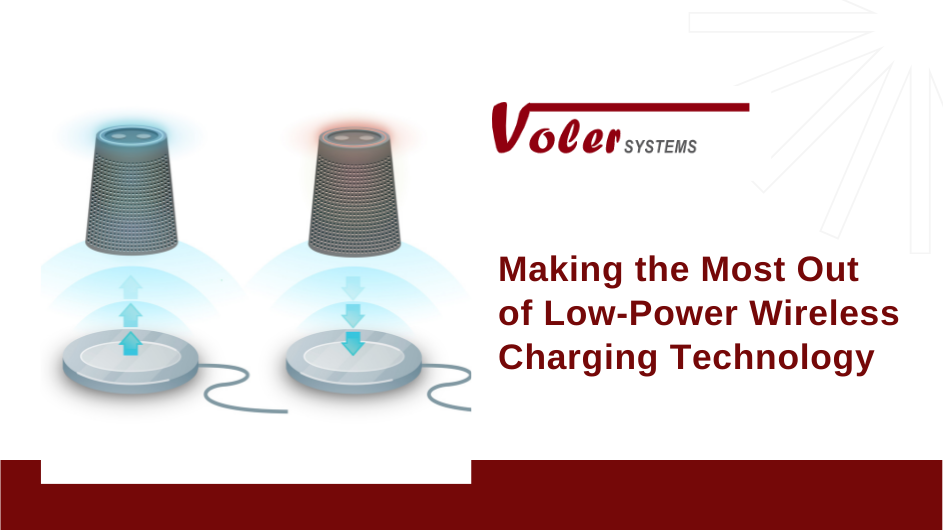 While wireless devices have been around for many years now, the boom of wearables and Internet of Things (IoT) devices has transformed every aspect of our daily lives. According to IDC, by 2025, the number of active IoT connections will surpass 55 billion, and IoT devices alone will transmit about 73.1 zettabytes of data!

The ongoing proliferation of IoT and wearables is forcing device manufacturers to rethink long-term power strategies. It's not enough to have simple wire-free communications. These days, consumers want the convenience of not having to plug into their devices for charging. Wireless charging also makes it easier to have a waterproof device.

Low-power wireless charging addresses many of those concerns, allowing the tech industry to push the boundaries of design and functionality.

Consumer-level wireless charging first entered the mainstream market around 2012. The adoption of wireless charging by big-name smartphone makers puts the technology in more homes, which is good news for modern device makers.

The Basics of Low-Power Wireless Charging

Believe it or not, the core concept of wireless charging has been around since the 19th century. The famed Serbian-American inventor and engineer, Nikola Tesla, laid the groundwork for the technology when he demonstrated magnetic resonant coupling.

The transmitter creates an electromagnetic field that the receiver uses to generate an electrical current. Both the transmitter and receiver have a coil, and they act together like a transformer. The circuits within the device will then convert the AC to DC, using it to charge the internal battery.

Magnetic resonance is usually the choice for devices that need a lot of power. You don't see it too much in lower-power wireless charging, and the technology is still in its early stages. However, it's poised to play a part in wirelessly charging electric vehicles and other largescale devices.

Other forms of wireless charging do exist. For example, electric field coupling, radio reception, and ultrasound wireless power transfer technology are available. Some of them promise low-power wireless charging in the future, but the tech isn't as widespread in consumer devices just yet.

As mentioned earlier, wireless charging is still relatively new. Many device makers are taking full advantage of the technology now, but there are still several challenges. Strategic circuit design can mitigate many of the effects these potential issues cause, but they're still inherent in modern low-power wireless charging.

One of the biggest challenges with electromagnetic induction is alignment. The receiver must be precisely positioned over the transmitter coil to take full advantage of the electromagnetic field. When things don't line up just right, the efficiency plummets.

Wireless charging is about simplicity and convenience. Having to precisely couple unseen coils can make the process more of an aggravation than anything else. Some device makers address this issue with mechanical features that ensure alignment when a device is placed in or on its charger.

Another potential issue is thermal management. Wireless charging isn’t perfectly efficient. 100-percent efficiency would require circuitry to have a physical connection, which isn't possible for a low-power wireless design.

Energy loss is standard, but that also leads to the obstacle of generated heat. Heat is a byproduct of lost energy. In most cases, the thermal energy is manageable, but some products can get so hot that the quality and longevity of the battery suffer.

As low-power wireless charging improves, developers hope to solve the inability to use some devices as they charge. The coupling demands require users to take wearables off or move electronics onto charging transmitters.

Currently, electromagnetic induction is about 50% less efficient than charging with a cable. Wireless charging wastes energy, which slows charging. This is a minor issue for wearable devices, however, as the total power needed for charging is relatively small.

The Future of Wireless Charging

The wireless charging realm is rapidly changing. Many tech companies are out there working to improve efficiency across the board. But that's not all.

Emerging technologies aim to make wireless charging even more convenient than it already is. Right now, most applications utilize near-field applications, forcing the transmission and receiving coils to be precisely aligned and less than a centimeter away. The technology works fine for wearables, medical devices, and smaller IoT gadgets.

We're already starting to see progress in new wireless power technology, and it's only going to get better moving forward. The biggest challenge for far-field charging is safety. The power is typically transmitted at frequencies that are absorbed by the human body. The power levels are high enough to cause injury.

The devices do detect the presence of a person or animal and turn off the power, but this feature has to be 100% reliable, which is very difficult. People are already concerned about the effects of wireless communications on people. Far-field wireless charging would be a bigger concern.

Low-Power Wireless Charging for Your Next Device

As you can see, wireless power technology has a lot to offer. While we're continually seeing vast improvements and innovations, what we have now can do a lot to meet user expectations. It's about combining strategic system and circuit design to develop the right solution for your product.

Let Voler Systems be your go-to source for product development. We have a deep understanding of low-power design and wireless charging technology. Take advantage of our expertise to ensure your product design is efficient, convenient, and capable of meeting your market needs.

Congratulations to Paul Russell who won our BIOMEDevice drawing for the RC solar car.