IoT Security: Obstacles That Continue to Challenge the Tech Industry 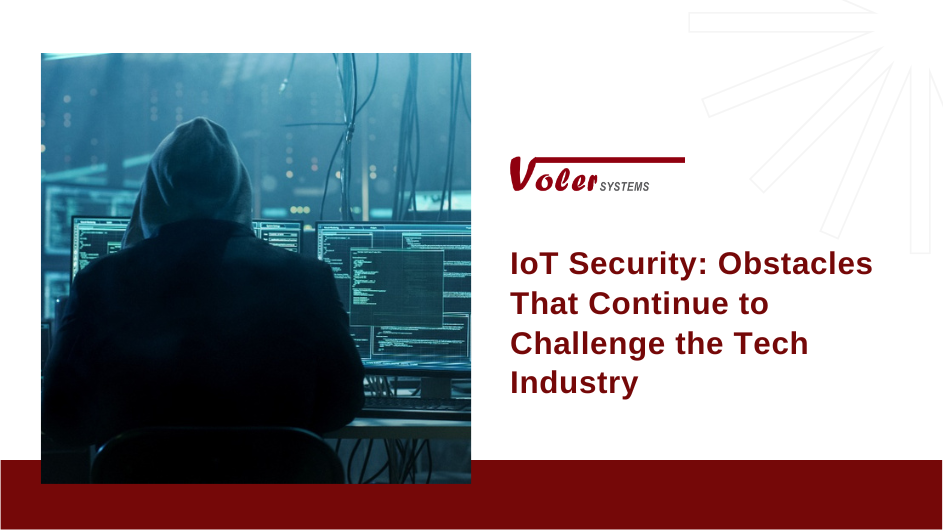 The Internet of Things (IoT) is quickly becoming an indispensable part of modern living. In 2021 alone, the global IoT market stood at an impressive $384.7 billion. Forecasts show no signs of the technology's growth slowing down any time soon, setting the stage for significant advancements in the consumer, medical, and even industrial markets.

We're starting to see this technology pop up in many exciting forms. It's changing the face of healthcare, making homes more intelligent, and adding functionality to seemingly simple wearable devices. But with that widespread adoption comes greater scrutiny of security risks.

Any connected device is vulnerable to possible security issues. But the nature of IoT technology makes it a hot target. In the first half of 2021, there were more than 1.5 billion IoT security breaches. Some of those were from high-profile tech companies, showing that vulnerabilities are no small matter.

The security risks for IoT devices are complex and ever-evolving. It's more important than ever to be aware of what's possible and to go to an experienced consultant to design your product with those risks in mind.

Here are some of the most significant security issues facing IoT devices.

Unfortunately, many IoT devices use unsafe wireless connections. One of the biggest draws of IoT is that you can have a fully integrated network of things that communicate with one another through wireless communication protocols. However, many of those connections aren't secure enough to keep devices and users safe.

It's a significant threat to medical devices. While security standards are high in a hospital setting, there are no guarantees outside that controlled environment. Many devices utilize simple protocols like Bluetooth or Bluetooth LE. Those connections are relatively easy to hack, and there have been many instances of cybercriminals making their way into seemingly secure networks.

But that's not all. IoT devices often synchronize data through the cloud. Data transmits to cloud servers for computing, creating a mess of vulnerabilities. While cloud computing is becoming more widespread, security challenges present a host of problems in healthcare.

With vulnerable wireless connections comes the threat of common cyberattacks. One of the most worrisome threats is possible man-in-the-middle attacks. These cyberattacks involve intercepting the connection and stealing potentially private information without users realizing there's an issue. Man-in-the-middle attacks can affect anyone, but they have the potential to provide access to business servers or banking systems.

Other possible issues that affect IoT devices include:

Some devices can even fall prey to hijacking. Thanks to TCP/IP stack vulnerabilities, hackers could theoretically take control of your device right under your nose.

Another issue with IoT devices is the lack of onboard security measures. It's why some gadgets fall prey to cyberattacks. Those vulnerable connections don't have extra layers of protection like encryption. But why?

Encryption is key to IoT security, but it's an uphill battle for these relatively simple devices. Encryption requires processing power, and that's not something many IoT gadgets have to spare.

Manufacturers make IoT devices to fulfill specific purposes. Most have to go to great lengths to fit all their requirements in a pint-sized gadget that's small enough to be portable. There's little room for extra processors, data protection, or security mechanisms.

It's an inherent computational limitation unique to some of these devices. Smartphones, laptops, and tablets all have the extra components to keep you and your data safe. But that's not the case with many IoT devices; however, security does not have to take a lot of resources in a small device.

Working with an experienced design services provider familiar with the encryption and authentication requirements specific to IoT devices is essential.

Another issue that's not so easy to get around is the expanded IoT attack surface. The attack surface refers to the total number of possible vulnerabilities cybercriminals could exploit. Ideally, devices should have as small of an attack surface as possible.

But with IoT, it's enormous. Not only do you have inevitable embedded vulnerabilities in the device itself, but there are also the endpoint devices, the many wireless connections, and the software to consider.

People go above and beyond to protect the things they understand. For example, most users are willing to pay for antivirus software. Thanks to the prevalence of malware, people know what can happen without that safety precaution.

Unfortunately, we're not there yet with IoT. As a result, users tend to be lax about IoT security. People use weak passwords and lack overall security awareness with their IoT devices, exposing them to easily avoidable vulnerabilities.

Many gadgets lack proper access control features. Once they trust a local network, they might not require any other authentication for other devices connected to the same network. That opens a can of worms, potentially providing cybercriminals access to an entire network through a very simple IoT device. That puts financial, corporate, and customer data at risk for businesses.

The final issue we'll discuss is the risks that come with software and firmware. IoT security threats are constantly evolving. That's the nature of cyberattacks. When one security protocol thwarts an attempted attack, criminals develop something new. It's a neverending game of cat and mouse.

Ransomeware is reportedly on the rise, and IoT devices continue to be a target because many lack consistent security-focused updates. It could be because manufacturers lack the budget for future updates or design devices without the means to download updates.

Those are some of the most widespread security issues IoT devices face. As this technology continues to change, so will the risks.

While many companies are treating security as an afterthought, it's not something you want to neglect. Protecting the end user is paramount whether you're creating a medical device or a consumer-level gadget.

At Voler Systems, we work hard to mitigate risks from the start of your development project. Our team understands the inherent dangers present with this technology. We integrate security measures every step and perform critical pre-market tests to understand your device's security needs. Our goal is to make the safest product possible without sacrificing what makes IoT technology great.

IoT Security: What We All Need to Know | Voler Systems

The Internet of Things, or IoT, has started to truly come into its own in the last few...

Cybersecurity experts are keenly aware of ongoing security issues that come with...