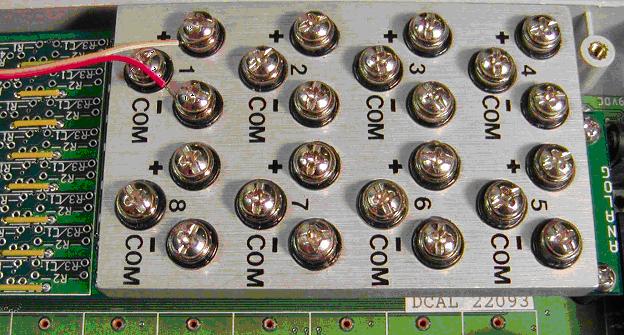 The most common sensor is a temperature sensor, and the most common temperature sensor is a thermocouple, and yet most people do not know how a thermocouple works. They are one of the most complex sensors to measure, yet they are very low cost and rugged. If you do not understand cold junction compensation you probably have errors larger than what is specified for your device. First some basics, then we will discuss some serious common problems.

A thermocouple generates a voltage that changes with temperature, so at a basic level, a device that can measure voltage can measure a thermocouple signal. This is called the thermoelectric effect or the Seebeck effect, and is caused by placing dissimilar metals in contact to form a junction. The voltage is very small, however. The most common thermocouples, types E, J, K, N and T change about 30 to 60 microvolts per degree C change in temperature. A data acquisition device that has a 10 V full scale range and 16-bit resolution can therefore only detect a change of 3 to 5 degrees C or larger. Thus amplification is usually required.

The more exotic thermocouples, types B, R, and S change about 10 microvolts per degree C change in temperature. The same 10 V 16-bit data acquisition device can only detect a change of 15 degrees C or larger with these types.

The calculation, on the other hand, is a high order exponential equation of the form:

Where T is the temperature, V is the voltage, and c0 to cn are constants.

Each added term of higher order (cnVn where n is the order) increases the accuracy. Some thermocouples require more than a tenth order equation to keep the linearity error less than 0.1 degree C.

The linearity correction is normally done in software on a PC where the complexity of the equation is not a problem. For devices not connected to a PC, such as stand-alone meters, temperature controllers, or many dataloggers, the linearity correction is done by a microprocessor in the device, where a look-up table may be the easiest. A few extremely simple devices without a microprocessor do not have linearization.


The Biggest Source of Error is Rarely in the Specifications!

The error in a thermocouple measurement is the sum of the following errors:

The first error is specified by the thermocouple manufacturer. The second and third are normally included in the specifications for the measurement device (though often the cold junction sensor error is listed separately or omitted).

The forth error is rarely specified, and it is often the largest error. It is the error from assuming that all the thermocouple connections are at the same temperature as the cold junction sensor. It is a difficult error to specify, because it depends upon the temperature gradients near the connections. Worst of all, unlike the other errors, which are repeatable, and can be removed with careful calibration, the this error changes with in an unpredictable way, causing errors that are likely to be unnoticed. As a result many people think they have higher accuracy than they actually do when using thermocouples.

The error is greatly reduced when there is a heat sink that keeps all the connections at the same temperature. It is also helpful to insulate the wires near the connections. Many data collection devices provide some type of heat sink, but usually they are of little value. This is a major error source that is not widely discussed. Insulation is rarely used, because it must be removed when the thermocouples are connected.

Many data collection devices provide some type of heat sink, but usually they are only slightly better than no heat sink. Insulation is difficult, because it must be removed when the thermocouples are connected.

It is largely left to the user to keep the connections at the same temperature. This may be difficult in an electronic device that dissipates heat or near hot or cold objects that are being measured. We have seen temperature errors of several degrees C due to temperature differences between the cold junction and the thermocouple connections, which is often the largest error in the system.

What can you do? The figure below is a rare example of a cold junction system that works well. We originally designed it in 1984, but unfortunately it has not been used by others.

The thick aluminum heat sink keeps all the screw terminals, where thermocouples connect, at the same temperature as the cold junction sensor inside (not visible). Tests showed that an air temperature difference of 5 degrees across the plate (large, but it can happen) was reduced to a 0.3 degree error. Without the heat sink the error would have been 5 degrees.

The most common thermocouples are types E, J, K, N, and T (see table 1). They are inexpensive, operate over a wide temperature range, and have a relatively large temperature coefficient. This makes them useful for most applications and relatively easy to interface. The different types are suitable in different environments depending upon the material they are made from. K and T are perhaps the most common, being suited to a wide range of environments, including air and water.

For high temperatures the B, R, and S type thermocouples are used. Both wires are made of Platinum alloys, which have a very high melting point, but they are expensive, and, because the materials are similar, the thermoelectric effect is much less, and the temperature coefficient is much smaller. Many data acquisition devices can interface with these thermocouples.

For very high temperatures the C, D, and G thermocouples are used. They are made of Tungsten and Rhenium, which gives them the highest operating temperature. Most data acquisition devices cannot handle these thermocouples, because they do not include linearization for these rarely used types.

Past Projects Whether designing new projects or extending the product cycle of old...

Business Performance Associates was founded in 1994 to assist companies in improving...