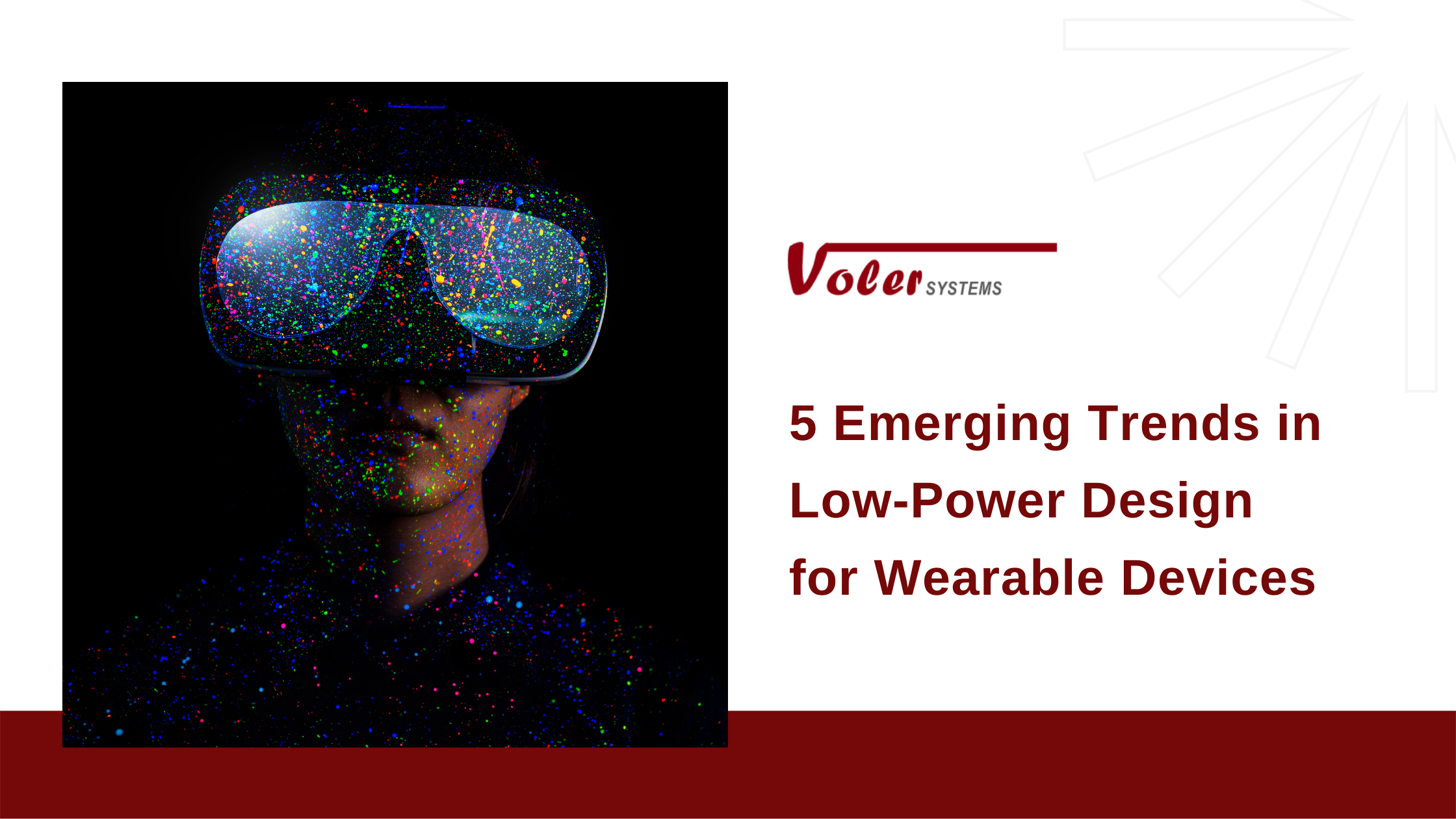 In the last couple of years, wearable technology experienced a massive surge. More device makers are getting in on the action, leading to some impressive innovations across the board. Many contribute the meteoric rise in popularity to the ever-evolving capabilities of the technology.

Sensors provide wearers with more in-depth information about their health and lifestyle habits. As a result, the value of wearables is skyrocketing. But of course, there's always room for improvement. Manufacturers and designers are constantly looking for ways to improve the capabilities of their products.

Perhaps the most important aspect is reducing power consumption to minimize the size of the battery and the frequency of recharging.

Whether you're talking about a consumer fitness tracker or a heart monitor, how a device uses power is paramount. The very nature of a wearable device revolves around efficient power usage. This tech is born from the need to be untethered while still retaining the capabilities of a wired alternative.

In the past, developers could not even fathom the thought of creating wearable devices due to power limitations. It wasn't until we had access to low-power processors and high-capacity batteries that this sector could flourish.

The tech world has come a long way, but low power design will always be crucial in wearables. As a result, developers are constantly pushing the limits of low power design and aiming for the most energy efficiency possible.

Optimal power is needed to collect and transmit data, monitor sensors, update software, and more. Plus, consumers and patients want and need as much power as possible for as long as possible from their wearable devices. The only way that's possible is with a better low-power design.

Progress is being made in wearable power design every year. Here are a few trends to keep an eye on.

A device's power source is one of the most crucial components in the mix. Batteries provide the juice to keep those sensors going for nearly all modern wearables.

Lithium-ion batteries have been the go-to for many years. They're a reliable power source that takes advantage of moving lithium ions to produce power. While battery design has improved a lot, we're approaching the point where the needs of technology surpass the capabilities of what these batteries can do.

Lithium-ion batteries, as we know them today, have their limits. Not only do they have a limited capacity for devices this small, but most only last between 300 and 500 charging cycles.

Fortunately, improvements are happening. Changes in battery design are slow and methodical, but they show promise for the future of wearables.

The focus for these batteries is currently on aviation because of their lightweight construction. However, recent efforts have improved lithium-sulfur battery life that could open doors to their use in wearables.

Solid-state batteries aren't new, but recent discoveries make them a viable electronics option. The batteries don't use a liquid electrolyte to move the ions with this design. It takes advantage of a solid compound.

Developers are experimenting with high-voltage, high-capacity compounds. It could be a game-changer. Pair that with better thermal safety and solid-state batteries could help the tech industry overcome current power limitations.

Another emerging trend is a more conducive form factor for wearables. Unique cell arrangement is paving the way for flexible and stretchable batteries. They don't require any new chemistry, so existing battery technology still applies.

However, the stretchable nature of the battery could make it easier for developers to increase power capacity. Prototypes reportedly extend to 150 percent of the original size without affecting functionality. That could open a world of possibilities for design.

Despite the many improvements in battery technology, batteries are improving slowly.  They are approaching the theoretical limit of chemical energy storage.  Advances in electronics are moving much faster.

Energy harvesting is an innovative area of study that's not yet to the point of practical application. Some believe that it's the future of wearables, but there's still a long way to go before we see implementation.

In the context of power design, energy harvesting is the act of gathering and storing energy from other sources. Think of solar and wind power as an example. But with wearables, it's about utilizing more energy produced by the body or movement.

Some examples that developers are experimenting with include:

Currently, these methods only gather microwatts of power, which is not enough to power most wearable devices. Some companies claim they will soon have energy harvesting that produces milliwatts of power.

The good news is that these techniques have a good outlook. Recent experiments by researchers at the National University of Singapore took advantage of body-coupled devices. They used multiple harvesting devices on the body to send power to a receiver and found that the technique could recover sufficient energy.

It normally takes years for research in universities to become commercially available; however, it's an exciting prospect for the future.

Bluetooth Low Energy (BLE) is one of the lowest power wireless communications for wearables. It is already a fantastic solution for reducing power and improving connection stability. However, recent innovations are making things even better.

BLE is the most popular wireless protocol. As it evolves, its impact on energy consumption will improve even more.

Low-power-wide-area-networks, or LPWANs, now directly connect to the internet for wearable devices, instead of using Bluetooth to a phone and relaying from the phone to the internet.  Protocols such as LTE-M and NB-IoT are much lower power than other cellular connections. They are now widely available, so devices using this technology will work for nearly everyone.  They are higher power than Bluetooth, so Bluetooth will continue to have its place.

Microprocessors have long been a critical technology in wearable devices. Every year new lower-power microprocessors are introduced. They are the “brain” of their devices, like PCs. These processors include new innovative technologies on the chip.

Newer microprocessors not only consume less power than many other options, but they are also smaller, more lightweight, and cost less.

New memory technology, magnetostrictive memory, will make dramatic changes in many fields, including wearable devices.  The latest evolution is STT-MRAM or Spin-transfer Torque Magnetic Random-Access Memory.  It uses the change of the spin of electrons in tunnel junctions.

This memory is fast and retains its memory when the power is off, combining the advantages of RAM and flash memory.  Using this new technology, designs will not have separate RAM and ROM or flash memory.  The program storage, data storage, and execution all happen in RAM at high speed and very low power.  This will change the Von Neumann architecture of processors that has remained the same for 75 years.  It will also allow fast execution in RAM and at low power, enabling much more processing in battery-operated devices and IoT and wearable devices.

This will allow much more edge processing—processing on the wearable device instead of in the cloud.  More advanced AI processing will be possible on the device, making local decisions or processing the data, so only the results need to be sent to the cloud instead of all the raw data.  This will reduce the power used for data transmission as well.  It is believed these changes will start coming in the next year or two.

Pushing the Boundaries of Power Design

There's much to look forward to with wearable devices, and power consumption is one aspect that will continually improve. These trends are bound to create lasting changes that enhance wearables even more. While end-users won't see the physical changes under the hood, they'll undoubtedly benefit from the energy efficiency and newfound capabilities.

If you want to create a new product using today's energy-efficient technologies, turn to Voler Systems. We're well-versed in ultra-low power design. Whether you're making a consumer-level wearable or one that's poised to save lives in a healthcare setting, we can help you implement a low-power design that exceeds your expectations.

The wearable device market is stronger than ever. Innovations continue to push the...

Frequently, we are called in to perform design reviews of wearable devices. Here are a...

Will People Use Your Wearable Device? 5 Design Considerations to Help Ensure They Do!